US reiterates its support to Sri Lanka

The United States has reiterated that it will continue to support Sri Lanka to overcome the economic crisis.

21
SHARES
2.7k
VIEWS
Share on FacebookShare on TwitterShare on Whatsapp

UNITED NATIONS (NewsRadio); The United States has reiterated that it will continue to support Sri Lanka to overcome the economic crisis.

Under Secretary of State for Political Affairs of the US Government Victoria Nuland said they will work with Sri Lanka to support a free and prosperous region.

The assurance was given when Under Secretary Victoria Nuland met with of Foreign Affairs Ali Sabry on the sidelines of the 77th session of the United Nations General Assembly in New York.

Meanwhile, Foreign Minister Sabry said both parties discussed a range of matters of bilateral importance and further US assistance to Sri Lanka.

The Foreign Minister will deliver the Sri Lanka statement at the 77th UNGA Session on the 24th of September in New York. 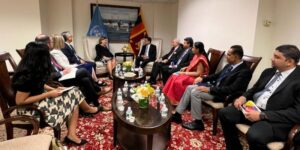 The Minister will also hold bilateral discussions with the Foreign Ministers of UN Member States.

The Ministerial Consultative Committee on Justice will meet on the 4th of October at 2pm in Parliament to consider the...