Leader of the United National Party Ranil Wickremesinghe has been elected by Parliament as the Eighth Executive President of Sri Lanka.

85
SHARES
10k
VIEWS
Share on FacebookShare on TwitterShare on Whatsapp

Leader of the United National Party and six-time Prime Minister Ranil Wickremesinghe has been elected by Parliament as the Eighth Executive President of Sri Lanka.

The UNP Leader replaced former President Gotabaya Rajapaksa who resigned from the post last week, as the Head of State.

A Parliamentary vote was held today to elect the succeeding President, in accordance with the provisions of the Presidential Elections (Special Provisions) Act No. 2 of 1981.

223 Members of Parliament voted during this morning’s Parliamentary election to pick the Eighth Executive President of Sri Lanka.

Accordingly, 219 valid votes were cast to elect the new President. Counting of ballots took place in the presence of three MPs.

Secretary General Dhammika Dassanayake then announced that Parliament has elected UNP Leader Ranil Wickremesinghe as the President of Sri Lanka. 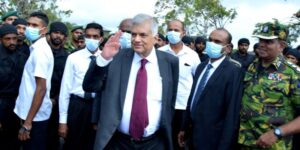 Ranil Wickremesinghe was elected to the ninth Parliament on June 23rd, 2021 as a National List Member representing the United National Party.

UNP Leader Wickremesinghe has now been in Parliament for 45 years.

He has held a number of positions in the political sphere including as a Cabinet Minister, the Leader of the House and Leader of the Opposition.

In 1977, under the JR Jayewardene Government, Ranil Wickremesinghe became the youngest Cabinet Minister of Sri Lanka holding the position of Minister of Youth Affairs and Employment.

Born on March 24th, 1949, President-elect Wickremesinghe studied at Royal College, Colombo, and was later elected to the Law Faculty of the University of Colombo and was sworn in as a Lawyer.

Ranil Wickremesinghe is the only person in Sri Lanka to hold office of the President and Prime Minister after graduating from a Sri Lankan University.

Despite the events, Ranil Wickremesinghe continued to steer the country as the acting President of the country until today’s vote.

Accordingly, the Parliamentary process to elect a new President concluded .

Meanwhile, President-elect Ranil Wickremesinghe says the government is responsible for formulating a new programme that will ensure the country’s way forward.

Speaking in Parliament after the announcement of the results of today’s vote to elect a President, the President-elect said the public does not want old politics and therefore Parliament must unite and work towards specific goals.

Wickremesinghe said Speaker of House Mahinda Yapa Abeywardana and he commenced their political careers together in 1973.

President-elect Wickremesinghe said it brings him joy that his victory was announced by the Speaker.

The President-elect said 43 years of his life has been spent in Parliament and thanked Parliament for providing him this honour.

The President-elect said DB Wijetunga was elected without a contest while 15 MPs who contributed to the win at the time are currently in Parliament.

President-elect Wickremesinghe said this was the only instance a vote was held to select a Head of State in Parliament adding however they were able to conduct and elect a President without any incident through discussion.

President-elect Wickremesinghe conveyed his gratitude to all Parliamentarians who worked towards his victory and for all other MPs who participated and voted at the election.

The President-elect said it is common knowledge that the country is facing great difficulties, and the country’s youth are demanding a change in system.

He claimed there are also many issues in the world and Sri Lanka should ensure to move forward without getting involved.

Parliament convened at 10am under the auspices of Speaker of House Mahinda Yapa Abeywardena.

Subsequently the announcement regarding the vote was made and Secretary General of Parliament Dhammika Dassanayake detailed the voting process.

Pakistan 44 runs away from victory in Galle

India rejects reports of attempts to influence the election

India rejects reports of attempts to influence the election

The King and his Queen Consort are set to host a reception at the Palace of Holyroodhouse in Edinburgh today...