Sri Lanka is still in contention for a place in the 2022 Twenty20 World Cup semi-final after beating Afghanistan by 6 wickets in a Super 12 stage contest in Brisbane.

36
SHARES
5.1k
VIEWS
Share on FacebookShare on TwitterShare on Whatsapp

BRISBANE (NewsRadio); Sri Lanka is still in contention for a place in the 2022 Twenty20 World Cup semi-final after beating Afghanistan by 6 wickets in a Super 12 stage contest in Brisbane.

In the process, Sri Lanka also knocked Afghanistan out of the World Cup. Chasing 145 runs to win the game, the Lankans crossed the line in 18.3 overs.

Dhananjaya de Silva who scored his third T20I fifty, spearheaded the chase scoring a boundary to complete the deserved win.

de Silva remained unbeaten on 66 off 42 balls. His innings comprised of six fours and two sixes.

Wanindu Hasaranga finished with impressive figures of 3/13 in four hours.

Sri Lanka did not allow the Afghans to race away with the game despite conceding 42 runs in the power play. 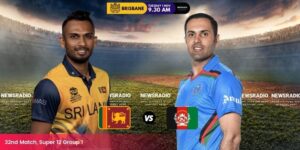 Sri Lanka will next take on England on Saturday in Sydney.

Sri Lanka will qualify for the semi-final of the T20 World Cup, if they beat England on Saturday and results also go their way. Afghanistan will meanwhile take on Australia in the final game of their campaign on Friday.

Approved borrowing limit for 2022 to be revised