Sri Lanka was restricted to 157/6 in 20 overs by a clinical Australian bowling attack in a Super 12 stage encounter of the 2022 Twenty20 World Cup in Perth.

23
SHARES
3.3k
VIEWS
Share on FacebookShare on TwitterShare on Whatsapp

PERTH (NewsRadio); Sri Lanka was restricted to 157/6 in 20 overs by a clinical Australian bowling attack in a Super 12 stage encounter of the 2022 Twenty20 World Cup in Perth.

Opener Pathum Nissanka who returned to the playing after an injury top scored with 40 off 45 deliveries.

The pair put on 69 off 58 deliveries for the second wicket.

Charith Asalanka tried to force the pace at the latter part of the innings to take Sri Lanka’s total past 150.

Asalanka remained unbeaten on 38 off 25 balls. 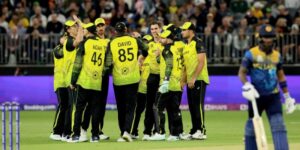 Australia also conceded 23 extras in the innings to help Sri Lanka’s cause.

Earlier in the afternoon, Australia won the toss and elected to bat first in the 19th game of the T20 World Cup in Perth.

Pathum Nissanka returned to the playing XI after missing out the Ireland game due to an injury.

He replaced Ashen Bandara in the playing XI. 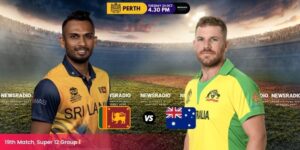 At toss, Skipper Dasun Shanaka said the team is confident since winning the Asia Cup and they are well prepared.

He said they chased down some big total and looking forward to take on Australia.

Meanwhile, Australia also made one change to its playing XI from the last game.

Ashton Agar is in the side in place of Adam Zampa who is reportedly contracted COVID-19.