0
SHARES
282
VIEWS
Share on FacebookShare on TwitterShare on Whatsapp

The fundamental cause of the prevailing foreign exchange crisis in Sri Lanka has been the rapid decline in the country’s credit ratings. This in turn resulted in Sri Lanka losing access to global capital markets and subsequently being unable to refinance maturing external debt. As a result, debt repayments have been settled out of the country’s foreign exchange reserves, causing reserves to decline rapidly.

There are two primary reasons as to why Sri Lanka’s credit ratings have deteriorated. Over the last 6 years Sri Lanka’s Fitch credit rating has been downgraded 5 times. In almost all cases the downgrades have been attributed to weakening fiscal sustainability (often following budget presentations) and declining foreign exchange reserves. The downgrade in December 2018 was an outlier as this was during the constitutional crisis and the downgrade was attributed to institutional and political instability.

At present, the Covid-19 pandemic cannot be attributed as a primary cause of the ratings downgrades. Peer economies have been able to sustain their credit ratings to a great extent amidst the worst of the pandemic. This confirms that Sri Lanka’s sovereign credit deterioration is largely explained by domestic factors. A key trigger of the rating downgrades was the tax policy changes in end 2019. These changes contributed to a 33.5% decline in the number of registered taxpayers and a 28% decline in government revenue in 2020. This further contributed to a spike in the budget deficit which was 14% of GDP in 2020 and a sharp increase in government debt.

In December 2019, shortly after the tax cuts were announced, Fitch ratings changed the rating outlook on Sri Lanka to negative, citing the ramifications of the tax cuts for debt sustainability. In April 2020 the credit rating was further downgraded, and subsequent downgrades occurred in November 2020 and December 2021 following budget presentations which failed to sufficiently address the fiscal challenges.

Having lost capital market access following the rating downgrades, Sri Lanka’s foreign exchange reserves (US$ 7.6 billion as at end 2019) declined rapidly as reserves were used to settle maturing external debt. As at end February 2022, Sri Lanka’s usable foreign exchange reserves have declined to US$ 734 million (excluding a USD 1.5 billion equivalent Chinese Yuan denominated currency swap). Between February 2022 and January 2023 Sri Lanka has foreign currency debt repayments amounting to USD 6.6 billion, highlighting the acute foreign exchange crisis faced by the country. The crisis cannot be solved without restoring the country’s credit ratings to at least a B level, enabling Sri Lanka to regain access to global capital markets and to refinance its maturing liabilities. 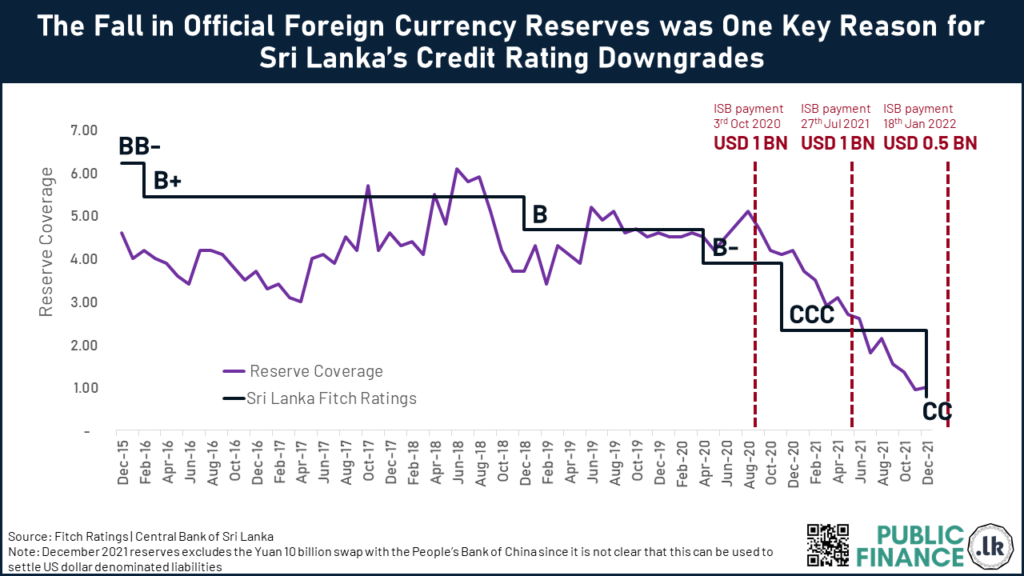 Life as we know it

Three sluice gates of the Laxapana Reservoir have been opened following heavy showers in catchment areas from yesterday.