Glenn Phillips scored a brilliant century but Sri Lanka managed to restrict New Zealand to 167/7 in 20 overs in a Super 12 stage game of the 2022 Twenty20 World Cup in Sydney.

19
SHARES
2.1k
VIEWS
Share on FacebookShare on TwitterShare on Whatsapp

SYDNEY (NewsRadio); Glenn Phillips scored a brilliant century but Sri Lanka managed to restrict New Zealand to 167/7 in 20 overs in a Super 12 stage game of the 2022 Twenty20 World Cup in Sydney.

At one stage, Glenn Phillips threatened to bat Sri Lanka out of the game with a 180+ run total.

Phillips was eventually dismissed in the final over for 104 in 64 balls.

Phillips received a reprieve early on when Pathum Nissanka missed an easy catch off a Wanindu Hasaranga delivery.

He made Sri Lanka pay for the miss as New Zealand who looked in real trouble in the power play conformably went past the 150-run mark. 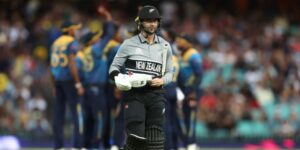 Four other bowlers picked up a wicket apiece.

Earlier, New Zealand won the toss and elected to bat first against Sri Lanka in the Super 12 encounter.

Both teams made one change each to the sides that played their respective previous games. 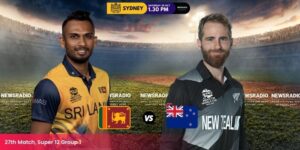 At the toss, Skipper Dasun Shanaka said he would’ve liked to bat first as well, however, they are confident since they have chased well in recent times.

Shanaka also acknowledged that they had a bad game against Australia but stressed that the spinners will be key for them going forward.

Shanaka is expecting the team to regroup and take on the Kiwis in the decisive game.

Sri Lanka is fifth on the points table after one win and one defeat in the Super 12 stage; however a victory today will take the Dasun Shanaka-led to the top of the standings.

New Zealanders on the other hand thrashed Australia in their opening game of the tournament and top the points table.