As messages of condolence flood in at the end of British monarch’s 70-year reign, Sri Lanka Navy, pays its highest tribute to the life and service of Her Majesty Queen Elizabeth II, passed away on 08th September 2022.

12
SHARES
1.5k
VIEWS
Share on FacebookShare on TwitterShare on Whatsapp

COLOMBO (NewsRadio); As messages of condolence flood in at the end of British monarch’s 70-year reign, Sri Lanka Navy, pays its highest tribute to the life and service of Her Majesty Queen Elizabeth II, passed away on 08th September 2022.

Just a couple of months after the coronation, Her Majesty Queen Elizabeth II embarked on her maiden royal visit to Sri Lanka on board SS Gothic in 1954 with Prince Philip, the Duke of Edinburgh who was a WWII veteran.

Serving in the Mediterranean Fleet of the Royal Navy as an officer, he had a stint in then Ceylon during WWII. The visit remains engraved as the first visit to Sri Lanka by a reigning monarch. During the visit, the Royals graced a ceremony where a jetty at the Colombo Harbour had been named after as ‘Queen Elizabeth Quay’.

As the Navy’s annals reveal, Her Majesty Queen Elizabeth II and Prince Philip had visited HMCyS Vijaya which escorted SS Gothic to the Port of Colombo.

Moreover, Prince Philip had been hosted to a banquet at the Wardroom of the Navy Headquarters.

In the following year, Prince Philip revisited Ceylon on board HMY ‘Britannia’ and had spent a whale of time with the Royal Ceylon Navy Officers in the Wardroom of the Navy Headquarters.

Ships of the Royal Ceylon Navy, predecessor to the Sri Lanka Navy, being a dominion navy had been prefixed with the acronym HMCyS – Her Majesty’s Ceylon Ship attributed to her reign, until Sri Lanka became a republic in 1972. After some 27 years, in 1981, Her Majesty the Queen made her second visit to the isle again to mark the 50th anniversary of Sri Lanka’s Universal Suffrage and to witness the construction of the Victoria Dam. On both those occasions, then Royal Ceylon Navy (1954), subsequently the Sri Lanka Navy (1981) had the rare privilege of according the Guard of Honour to Her Majesty Queen Elizabeth II, arrived in with the Royal entourage.

The Queen also had a strong attachment to the Navy as a daughter, wife and mother of naval officers. She had publicly announced about this perennial connection at the commissioning ceremony of Royal Navy’s flagship HMS Queen Elizabeth. Thus, her father, husband and two sons have served the Royal Navy in different stages of their lives. 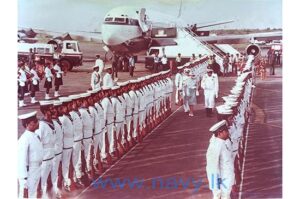 President to embark on a crucial visit to Japan

President Ranil Wickremesinghe has issued directives to resume the program of awarding scholarships through the President’s Fund to students who...