0
SHARES
4
VIEWS
Share on FacebookShare on TwitterShare on Whatsapp

Minister of Foreign Affairs Ali Sabry says Sri Lanka has demonstrated significant openness to trade and commerce and, today, Sri Lanka is poised and is well positioned to be one of the major trading hubs of the Indian Ocean.

The Minister addressing the 22nd Meeting of the Council of Ministers of the 23- member Indian Ocean Rim Association (IORA) in Dhaka, Bangladesh, underscored the significance and necessity of actively engaging with the countries of the Indian Ocean Rim to mutually advance economic and commercial interests of Sri Lanka as well as to maintain peace and stability in the region of Indian Ocean.

Minister Sabry stressed that Sri Lanka’s commitment for matters that concern the Indian Ocean region remain one of the key cornerstones of current economic and foreign policy of Sri Lanka.

Recalling the historical background on trade and commerce as well as connectivity in the Indian Ocean region, the Minister highlighted that Sri Lanka is strategically positioned at the centre of one of the busiest sea lanes of the world.

He also added that Sri Lanka’s traditional and ancient links with the countries of the Indian Ocean Rim Association go back to many centuries and empirical evidence reveals that Sri Lanka’s geographical centrality markedly facilitated and aided maritime commerce and trade over the centuries.

The Minister claimed that given the progression as an Indian Ocean Hub, Sri Lanka has emerged as one of the most pivotal shipping lanes since two-thirds of the petroleum products and half of the container shipments of the world criss-cross close to the Southern coast of the Island.

The Minister apprised the member states at the Council of Ministers of the IORA with regard to Sri Lanka’s efforts in sustainable and efficacious usage of maritime resources and immense ocean pollution challenges as well as projects and programs implemented to safeguard the coastal belt and the Indian Ocean.

This is in order to maintain pollution free and cleaner Indian Ocean following the MV X-Press Pearl calamity of last year and emphasised the necessity for countries to work in a concerted manner in addressing ocean pollution, especially during maritime disasters. 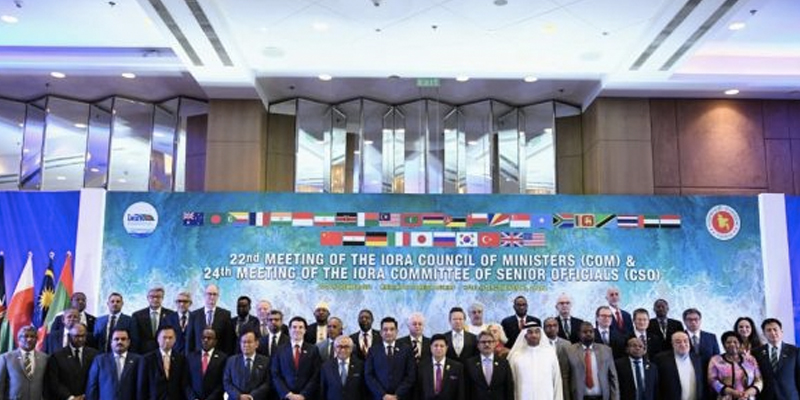 Highlighting Sri Lanka’s interests in the IORA and the region, as well as Sri Lanka’s active role in the organisation as the current Vice Chair of IORA, Minister stated that Sri Lanka would be the next Chair of the IORA from 2023 to 2025 with a firm conviction to further expand and elevate the scope and breadth of the organisation to be more relevant and more pertinent to the rapidly emerging importance of the Indian Ocean in the current geo-political and geo-economic scenario.

Minister Sabry would be having a number of bilateral meetings with the counterpart members of the IORA countries on the margins of the IORA Council of Ministers’ Meeting and with the senior most leadership of the Government of Bangladesh.

It is with great pleasure and privilege that I deliver the statement, both as the Vice Chair of the Indian Ocean Rim Association (IORA) and as the Head of Delegation of Sri Lanka, at the 22nd Council of Ministers ‘Meeting today. Let me first congratulate, Mr. Chairman, for  your able leadership and direction in steering this  meeting and for your guidance for completing the objectives and tasks ahead. I wish to extend the deep appreciation of my delegation also for the exceptional hospitality extended by the Government of Bangladesh. Your stewardship in organizing this meeting and hosting consecutive IORA meetings, amidst challenges posed by the COVID-19 pandemic for the past year, stand testimony for the commitment of the Government of Bangladesh for this 23-member imposing and vibrant organisation. Allow me to express our sincere gratitude for the documentation and institutional support extended by the Secretariat of the IORA for this meeting and wish to thank Mr. Secretary General for your guidance.

Yours Excellencies,
Ladies and Gentlemen,

Being an island nation, the ocean is never too far from Sri Lanka. Situated right at the centre of the busiest sea lanes of communication in the world, whilst the geography links the country with the Indian Ocean and its destiny are interconnected to this strategic body of water. For centuries, the Indian Ocean has been part of Sri Lanka’s strategic, security, and political chronicle. From the ancient past to the modern day, Sri Lanka’s key historical lesson from the Indian Ocean is seminally important to global trade, commercial and economic cooperation and augmentation. Sri Lanka’s traditional and ancient links with the countries of the Indian Ocean go back to the second millennium BC. Many forms of evidence have manifested that Sri Lanka’s strategic geographic centrality enabled maritime transactions in terms of both trade and cultural exchanges since, at least, the 2nd Century BCE. Numerous pivotal research and studies on Sri Lanka’s ancient maritime trade have enunciated the flourishing trade based on the “Maritime Silk Route” that connected Europeans, Arabs, Indians and Chinese.

Building up from the past as a country that has demonstrated significant openness to trade, today we are poised and positioned to be one of the major trading hubs in the Indian Ocean. Therefore, Sri Lanka’s commitment for the matters that concern the Indian Ocean remain at the heart of Sri Lanka’s current economic and foreign policy. Through our advancement as an Indian Ocean hub concept, Sri Lanka has emerged as one of the most vital shipping lanes and hubs in the South Asian region since around 2/3rd of the oil and half of the container shipment of the world passes from the Southern part of Sri Lanka. Sri Lanka, thus has become important for the security of sea lines of communications and in maintaining the freedom of navigation in the Indian Ocean.  Sri Lanka’s geographic location and its access to regional markets add immensely to its economic and commercial interests, and as the region has also evolved as a platform for projection of power by major power players.

Furthermore, well endowed with resources, which are yet to be fully explored, exploited and excavated, the Indian Ocean remains today as one of the most sought after research bases for sea bed minerals, fish stock and other ocean resources. As the region is home to many rapidly growing economies, which require energy and other necessities to fuel this growth, we witness increasing global attention to this “sphere of water”, which had been a growing trend in the recent past.

Sri Lanka remains committed to safe, secure Indian ocean and sustainable use of its maritime resources. Our efforts in addressing massive ocean pollution challenges stem as a result of accidents such as the Express Pearl disaster, which unfortunately, disrupted the region on a massive unprecedented scale. The X-Press Pearl incident is the worst maritime disaster that Sri Lanka has confronted in modern times. The vessel was carrying a total of nearly 1,500 containers that included cargo with hazardous substances, in addition to about 325 metric tons of fuel on board. The said disaster is now considered as the largest ship disaster involving plastic pellets, hazardous and noxious materials, in the world. The geographic bounding of the incident remains unknown given its developing nature. A substantial proportion of the plastic pellet pollution will remain mobilized in the ocean for decades to come. Modelling studies suggest that the pellets will make landfall across Indian Ocean coastlines. We have implemented a significant number of projects and programmes to ensure that our ocean remains less polluted and more clean following this incident and we have been working with many other countries and international agencies, which deal and address ocean pollution to lessen the negative impact of this disaster.

Mr. Chairman, Your Excellencies and Ladies and Gentleman,

I would like to stress that Sri Lanka’s interests in the IORA and the region of the Indian Ocean are of paramount importance for the country. It is with this driving agenda that we will be seeking to assume the Chairmanship of the IORA next year with a firm conviction to further expand and elevate the scope of the organisation to be more relevant and applicable to the rising significance of the Indian Ocean. The IORA as an organisation has come a long way. It has proven its capability and capacity to bring together a diverse cluster of countries under one platform to discuss all matters pertaining to the Indian Ocean and sustainable use of the Indian Ocean. Sri Lanka, as an active member of this organization is eagerly looking forward for further interaction with all the member countries and contribute efficaciously to the enhancement and success of this Organisation.

Your Excellencies, Ladies and Gentlemen

In conclusion, let me once again reiterate that IORA brings together socially, culturally, geographically, economically and politically diverse groups of countries under one platform. This unique and critically salient platform could transform and translate the future of the Indian Ocean, if we pool and synergise all our ideas and visions together to work effectively for the betterment and advancement of our countries. I am confident and optimistic that under the able leadership and direction of Bangladesh as the Chair and the highly committed and competent team at the Secretariat, under the Secretary General, these endeavours and aspirations could be realised and attained, thus mutually benefitting the people of all 23-member countries numbering over 2.7 billion populace .

I thank you for your kind attention.

Under the guise of human rights, cannot allow persons to unleash violence -President

Entrepreneurs must be enriched similar to employees-Manusha