Expressway bus fares have been reduced by 10 percent.

23
SHARES
2.6k
VIEWS
Share on FacebookShare on TwitterShare on Whatsapp

COLOMBO (NewsRadio); Expressway bus fares have been reduced by 10 percent.

Minister Gunawardena said they decided to amend the bus fare pricing formula in order to provide relief to bus operators and the general public.

He said the fare calculation method has been changed, considering the current climate in the country and to safeguard the passengers and bus operators.

He said the number of buses running along the Colombo-Matara route have reduced considerably due to the costs and lack of demand.

The Transport Minister said considering all factors, certain benefits have been granted to bus operators while passengers will also receive the benefit of reduced bus fares from today. 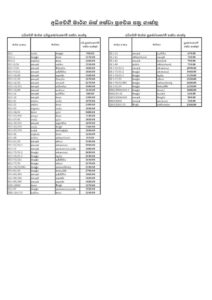 Appointment of selection committees for all sports under a new system