President Ranil Wickremesinghe to present the 2023 Budget in Parliament today

President Ranil Wickremesinghe is scheduled to present the 2023 Budget in Parliament today.

68
SHARES
9.3k
VIEWS
Share on FacebookShare on TwitterShare on Whatsapp

President Wickremesinghe in his capacity as the Minister of Finance will deliver the second reading of the 2023 Appropriation Bill from 1.30pm in Parliament.

The Appropriation Bill for the year 2023 was presented in Parliament on the 18th of October.

The Leader of the House, Minister Susil Premajayantha on behalf of the Minister of Finance presented the Appropriation Bill in Parliament. 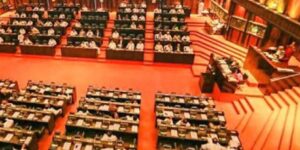 The 2023 Budget, scheduled to be presented by the President is expected to contain proposals to provide concessions to the people and programmes to rebuild the economy.

The PMD noted that the 2023 Budget has given special attention to the sectors of capital market, export market, labour market and digital economy and it is expected to achieve the budget targets through the social market economy.

The PMD added, this year’s budget will focus more on providing social welfare benefits to the people who need them most and creating a policy environment to build the private sector as the driving force of the country’s economy.

Through the 2023 budget, the process of building a new economy tailored for the new world has been initiated aimed at creating a program to ensure a decent country for the youth.

The Ministry of Finance said in order to stabilize the economy, the government is compelled to enforce tax reforms.

Meanwhile, according to the Appropriation Bill, total spending for 2023 is expected at Rs.5.9, with capital expenditure likely to make up 20.9% of that total.

State Minister of Finance Ranjith Siyambalapitiya also has confirmed that a series of proposals aimed at welfare and developing Sri Lanka will be presented by President Ranil Wickremesinghe today amidst a situation where 68 percent of the total population is seeking concessions and relief.

State Minister Siyambalapitiya noted that the 2023 Budget will contain a series of medium and long-term proposals to rebuild the country’s economy which has collapsed. 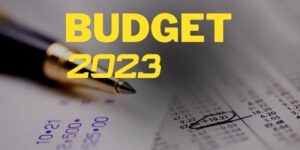 The Finance State Minister added that the President had also advised officials to prepare a budget with welfare-oriented proposals as a consolation to the citizens who are facing a number of issues to make ends meet in face of rising commodity prices and inflation.

State Minister of Finance Ranjith Siyambalapitiya added that the government is expecting to spend Rs.7,885 billion in the year 2023.

The amount is an approximate increase of Rs.1,785 billion from last year.

Rs. 2,442 billion has been allocated for recurring expenditure such as salary payments and subsidies.

According to the Finance Ministry, Rs.4,218 billion has been allocated for loan installments and interest payments.

The government considering the current climate in the country has proposed to allocate Rs.572 billion for social security and welfare programmes, Rs.504 billion for education and Rs.432 billion for the health sector.

Through the Budget, Rs.410 billion has been allocated for defence. 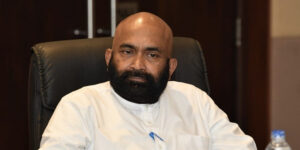 State Minister of Finance Ranjith Siyambalapitiya noted that through the 2023 Budget, the government is laying the platform to strengthen the economy and therefore requested the support of all factions to execute the Budget proposal.

Meanwhile, today marks another milestone in President Ranil Wickremesinghe’s illustrious political career where he will make his maiden annual budget speech in Parliament. 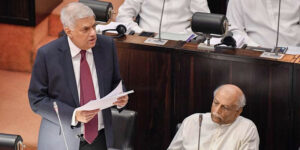 Earlier this year, President Wickremesinghe made a brief speech delivering the interim budget for 2022.

The second reading debate on the 2023 Budget will take place for seven days from tomorrow to the 22nd of November.

The Second Reading Division is scheduled to take place at approximately 5pm on Tuesday, the 22nd of November.

The Committee Stage Debate will be held for 13 days from the 23rd of November.

The final vote on the 2023 Budget to be presented by President Ranil Wickremesinghe in Parliament is scheduled to take place at 5pm on Tuesday, the 8th of December.

Meanwhile, a special security arrangement will be in place in and around the Parliamentary Complex today.

Arrangements have been made as President Ranil Wickremesinghe in his capacity as the Minister of Finance is scheduled to deliver the 2023 Budget in Parliament this afternoon.

Speaker of House Mahinda Yapa Abeywardena has accordingly announced a number of security measures that will be in place until the end of the Budget speech.

Based on the announcement made by the Speaker, the entire parliament building including the rest rooms of the Members of Parliament have already been subjected to security inspections.

Meanwhile, today, Parliament galleries will be restricted only for the diplomatic corps. Parliamentarians’ car park will also remain closed today. 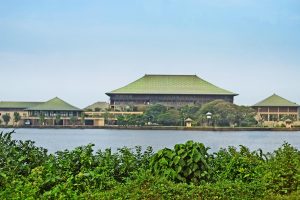 The Speaker of House has noted that special traffic arrangements will be adopted by the Traffic Police and the nearest Police stations in the area this afternoon.

Meanwhile, the Speaker has also requested the Members of Parliament to extend their support to authorities to implement the security arrangements when the 2023 Budget will be delivered by the President.

Showers predicted in most places of the island after 2pm

Showers predicted in most places of the island after 2pm