32
SHARES
4.4k
VIEWS
Share on FacebookShare on TwitterShare on Whatsapp

MANILA (NewsRadio); President Ranil Wickremesinghe is currently addressing the annual Board of Governors of the Asian Development Bank.

The President’s Media Division said the 55th annual meeting of the Board of Governor is taking place in Manila, Philippines.

The PMD said Philippines President Marcos accorded a rousing welcome to President Wickremesinghe upon his arrival at the Malacanang Palace. 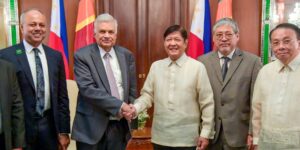 During the meeting, President Ranil Wickremesinghe said the long-standing friendship between Sri Lanka and the Philippines would be promoted by developing Asian regional cooperation.

A greater emphasis had been placed on further strengthening the longstanding bilateral relations between Sri Lanka and the Philippines through new approaches.

Senior Adviser to the President on National Security and Chief of Presidential Staff Sagala Ratnayake, Secretary to the Ministry of Finance Mahinda Siriwardena, Sri Lankan Ambassador to the Philippines Shobini Gunasekera and the Sri Lankan delegation were present on this occasion.

President hints at the emergence of a new world order

President hints at the emergence of a new world order