Pakistan defeated New Zealand by 7 wickets to qualify for the finals of the 2022 Twenty20 World Cup.

67
SHARES
8.6k
VIEWS
Share on FacebookShare on TwitterShare on Whatsapp

SYDNEY (NewsRadio); Pakistan became the first country to qualify for the 2022 Twenty20 World Cup after defeating New Zealand by 7 wickets in Sydney.

The pair put on 105 for the first wicket to lay the platform. Skipper Azam scored 53 off 53 balls while Rizwan top scored with 57 off 643 deliveries.

Mohammad Haris hit 30 off 26 balls to complete the win. 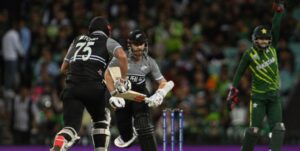 Mitchell who scored his third T20I fifty finished the innings on 53 not out off 35 balls.

For Pakistan, Shaheen Shah Afridi finished with 2/24 while Mohammad Nawaz had one scalp. 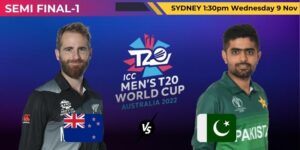 Earlier in the afternoon, Skipper Williamson won the toss and elected to bat first.

Pakistan progressed to the semi-final after losing their opening two Super 12 games to India and Zimbabwe.

New Zealand on the other hand lost only one game in the Super 12 stage and was favorites to progress to the finals.

Meanwhile, tomorrow, India will take on England in the second semi-final Adelaide.

The final of the T20 World Cup will be worked off in Melbourne on Sunday.