The number of students receiving therapy from the counseling service centre within the University of Peradeniya has seen a considerable increase.

42
SHARES
5.9k
VIEWS
Share on FacebookShare on TwitterShare on Whatsapp

PERADENIYA (NewsRadio); The number of students receiving therapy from the counseling service centre within the University of Peradeniya has seen a considerable increase.

The University said more than 200 students have obtained counseling services from the special centre in the past three months.

Meanwhile, some students who are in need of urgent medical attention have also been directed to the Peradeniya Teaching Hospital.

Deputy-Chancellor of the Peradeniya University Professor Terrence Madhujith said some students are suffering from severe stress owing to the prevailing economic and social issues.

Professor Terrence Madhujith also confirmed that they have taken steps to expeditiously investigate ragging incidents reported within the university. 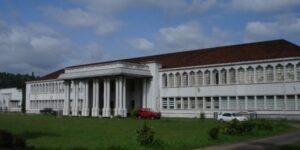 A number of ragging incidents were reported in recent weeks from the University.

It is a known fact that a considerable amount of students abandoned their university education without being able to cope up with stress and ragging.

Heavy showers about 100mm predicted in some places today

Heavy showers about 100mm predicted in some places today