0
SHARES
20
VIEWS
Share on FacebookShare on TwitterShare on Whatsapp

The Minister of Finance with the intention of attracting foreign currency in the hands of the public into the formal banking system, has issued several measures.

The Minister issued the order under Section 8 of the Foreign Exchange Act No. 12 of 2017.

Accordingly, the Central Bank of Sri Lanka said the amount of foreign currency retained in possession by a person in, or resident in, Sri Lanka from USD 15,000 to USD 10,000 or its equivalent in other foreign currencies will be reduced.

Meanwhile, granting an amnesty period of 14 working days effective from the date of the Order, the 16th of June 2022, for persons in, or resident in, Sri Lanka who hold foreign currency notes in possession for the following to deposit into a Personal Foreign Currency Account or into a Business Foreign Currency Account as specified in the Order, or to sell to an Authorised Dealer (A Licensed Commercial Bank or National Savings Bank).

The CBSL statement said at the end of the said amnesty period, the Central Bank has the right to initiate action against persons who hold foreign currency in possession by violating the Order, in terms of the provisions of the Foreign Exchange Act. 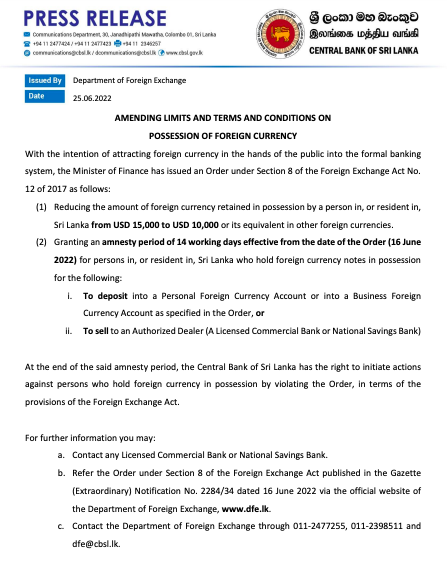 Four arrested with stocks of fuel in Kandaketiya