Daily power cuts will continue next week as well.

0
SHARES
84
VIEWS
Share on FacebookShare on TwitterShare on Whatsapp

Daily power cuts will continue next week as well.

The Ceylon Electricity Board has announced that it has sought permission to impose four-hours-and-30-minute power cuts daily from tomorrow (25) to the 27th of April.

According to the proposed schedule, three-hour power cuts will be imposed between 8.30am and 6pm to areas A to L and P to W.

Meanwhile, one-hour-and-30-minute power cuts will be imposed between 5.30pm and 9pm daily to areas A to L and P to W.

Furthermore, the CEB said three-hour power cuts will be imposed to CC area between 6am and 9.20am daily as part of the demand management measures due to inadequate power generation as a result of fuel shortage, hydro storage, and unavailability of generators. 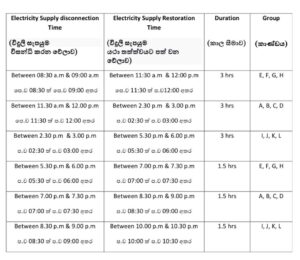 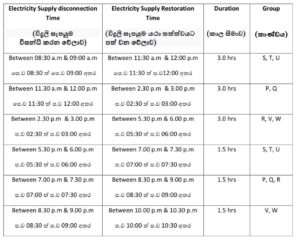