0
SHARES
1.1k
VIEWS
Share on FacebookShare on TwitterShare on Whatsapp

Police curfew has also been imposed within the Kelaniya Police Divisions with immediate effect.

The Police Media Unit informed NewsRadio that the directive has been issued by the Inspector General of Police.

SSP Talduwa said individuals found to be violating curfew will be considered offenders in maintaining public law and order while the law will be enforced against them.

Curfew has been imposed following a mass protest in Mirihana in the vicinity of the private residence of President Gotabaya Rajapaksa. 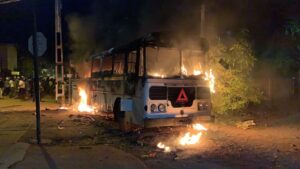 The demonstration got out of hand when protesters and law enforcement officials clashed.

A Sri Lanka Army bus was also set on fire.

Tear gas and water cannons were fired to disperse the crowd.

Curfew in six Police Divisions lifted at 5am

Curfew in six Police Divisions lifted at 5am

Minister of Power and Energy Kanchana Wijesekera says the government incurs massive losses due to the sale of kerosene oil...