A fire and a huge explosion have killed at least 32 people and injured hundreds more at a storage depot near the city of Chittagong, Bangladesh.

A fire and a huge explosion have killed at least 32 people and injured hundreds more at a storage depot near the city of Chittagong, Bangladesh.

Hundreds of people had arrived to tackle the fire when a number of containers exploded at the site in Sitakunda.

The cause of the fire is not known, but it is thought that chemicals were stored in some of the containers.

Hospitals in the area are overwhelmed and have appealed for blood donations.

Many of the injured are reported to be in a critical condition with burns covering 60% to 90% of their bodies.

“The explosion just threw me some 10 metres from where I was standing. My hands and legs are burnt,” lorry driver Tofael Ahmed told AFP news agency.

Another volunteer told the agency he had seen more bodies inside the area affected by the fire.

Several firefighters are among the killed and injured.

The depot contained millions of dollars of garments waiting to be exported to Western retailers, according to a regional government official. Bangladesh is a major supplier of clothing to the West.

The explosion was so large it was heard several kilometres away and shattered the windows of nearby buildings. One local shopkeeper told reporters that a piece of debris had flown half a kilometre and landed in his pond. He described seeing “fireballs falling like rain” after the explosion.

The fire was still burning on Sunday morning, several hours after the blast. The army has been deployed to prevent chemicals flowing into the sea.

Sitakunda is only 40km (25 miles) from Bangladesh’s second-largest city, Chittagong, and one of the city’s hospitals has been inundated with victims. Military clinics are helping to treat the injured.

Fires are common in Bangladesh. Last year, at least 39 people were killed after a ferry caught fire in the south of the country. And earlier that same year, at least 52 people died in a factory fire in Rupganj near the capital, Dhaka.

Three workers were also killed in 2020 after an oil tank exploded in another container storage depot in Patenga, not far from Chittagong. 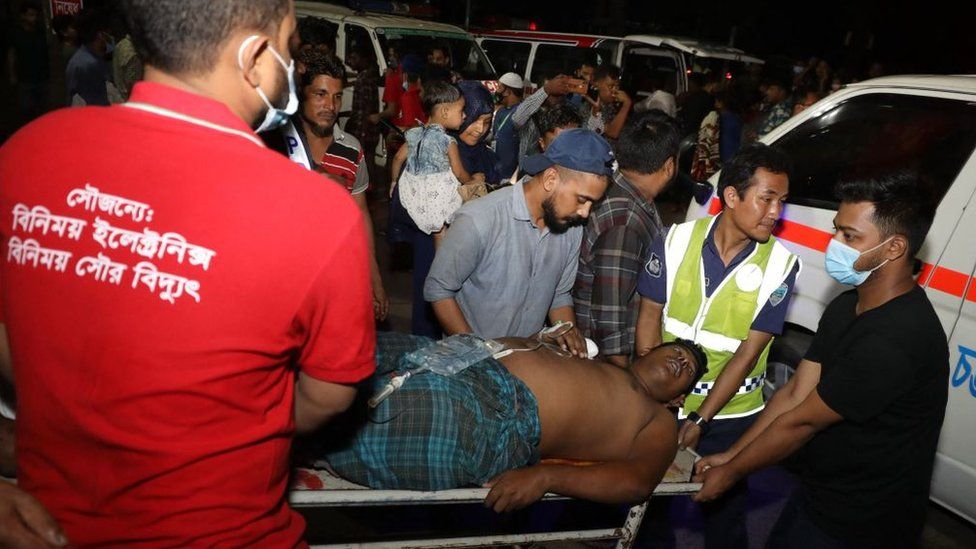 Stuart Broad concedes Test-record 35 runs in one over

PAFFREL claims some positive features dropped in 22A

Ashton Agar ruled out of the final Test against Sri Lanka

Stuart Broad concedes Test-record 35 runs in one over

England's new entertaining style took a bizarre turn when Stuart Broad was hit for the most expensive over in Test...

Velu Kumar warns that national security is at threat

Health workers can’t fight to get fuel at sheds-Devika