Sri Lanka led by Dasun Shanaka despite needing to go through A qualification process to enter the main draw of the 2022 Twenty20 World Cup is still in contention to secure a place in next week's semi-finals.

58
SHARES
6.7k
VIEWS
Share on FacebookShare on TwitterShare on Whatsapp

AUSTRALIA (NewsRadio); Sri Lanka led by Dasun Shanaka despite needing to go through A qualification process to enter the main draw of the 2022 Twenty20 World Cup is still in contention to secure a place in next week’s semi-finals.

Sri Lanka topped the qualifying group despite losing to Namibia in the tournament opener.

They then thrashed Ireland by 9 wickets to kick-start the Super 12 round games.

However, back-to-back defeats at the hands of hosts Australia and table toppers New Zealand left Sri Lanka on the brink.

Sri Lanka will take on England in their final game in Sydney on Saturday. 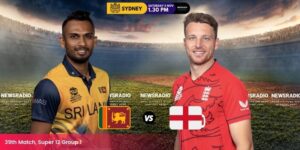 Sri Lanka must defeat the English and hope results of two matches on Friday go their way.

The only way the Lankans can qualify is if they beat England, and if at least one of New Zealand or Australia lose their last game. If their game against England gets washed out, Sri Lanka will be eliminated given that their NRR is so far behind that of New Zealand.

Ireland also has a mathematically chance of qualifying from Group 1.

Afghanistan is out of the race after yesterday’s defeat but can help Sri Lanka’s cause by defeating the Australians in their final game of the T20 World Cup on Friday.

Meanwhile, at the start of the T20 World Cup campaign, the Sports Desk of NewsRadio predicted Australia and New Zealand from Group 1 and India and South Africa from Group 2 to progress to the semi-final.