The government has apprised the United Nations on the steps taken by Sri Lanka to overcome current challenges.

12
SHARES
2.3k
VIEWS
Share on FacebookShare on TwitterShare on Whatsapp

UNITED NATIONS (NewsRadio); The government has apprised the United Nations on steps taken by Sri Lanka to overcome current challenges.

Matters related to political and economic affairs in Sri Lanka were discussed during a meeting between Minister of Foreign Affairs Ali Sabry and United Nations Under-Secretary-General for Political and Peacebuilding Affairs Rosemary A. DiCarlo.

They met on the sidelines on the 77th Session of the United Nations General Assembly in New York.

Minister Ali Sabry has also briefed the UN Under-Secretary-General pertaining to projects conducted by the UN Department of Political and Peacebuilding Affairs (DPPA).

Minister of Foreign Affairs Ali Sabry says all factions should work together to overcome the contemporary challenges.

Minister Sabry also called for strengthening South-South cooperation and underlined the importance of reaching out to the Global North to overcome contemporary challenges.

The Foreign Minister made these remarks while addressing the Meeting of Ministers of Foreign Affairs of the Member States of the Group of 77 & China on the sidelines of the 77th Session of the United Nations General Assembly in New York. 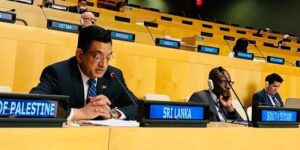 Minister of Foreign Affairs Ali Sabry is scheduled to deliver the Sri Lanka statement at the 77th Session of the United Nations General Assembly in New York later today.

The High-level segment of the Session commenced on the 20th of September and will conclude on Monday.

Foreign Minister Ali Sabry is leading the Sri Lanka delegation at the 77th UNGA session in New York in the absence of President Ranil Wickremesinghe. 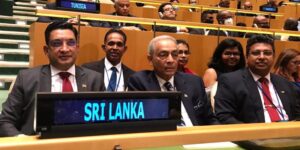 Individual arrested with 102g of heroin in Peliyagoda