GMOA warns of mass exodus of doctors due to tax increases

Secretary of the Government Medical Officers’ Association Dr. Haritha Aluthge says the proposed income and other tax revisions will prompt medical professionals to leave the country.

41
SHARES
6.4k
VIEWS
Share on FacebookShare on TwitterShare on Whatsapp

Speaking during a media briefing, Secretary of the GMOA Dr. Haritha Aluthge stressed that even specialist doctors will flee the country due to the proposed tax increases.

He said Members of Parliament and the government must take steps to amend the tax revision proposals.

Dr. Aluthge stressed that the failure to do so will result in specialist doctors abandoning the country.

He said according to the proposal, some doctors will have to pay around two months worth of his or her salary yearly as taxes.

Dr. Haritha Aluthge said doctors will consider the impact it will have on their children and family and will leave the country.

He said the majority of the doctors have not considered leaving Sri Lanka despite the economic crisis, but warned that the proposed tax revision will lead to a mass exodus.

The GMOA Secretary stated that the government is implementing the tax revisions based on the directives of the International Monetary Fund.

He said they will direct their concerns in writing to the President, the Prime Minister and the Members of Parliament. 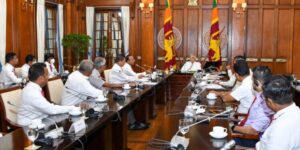 Dr. Haritha Aluthge said they are willing to meet the MPs and discuss ways to prevent the massive tax hike and safeguard the country’s health sector.

Although Secretary of the GMOA Dr. Haritha Aluthge was noncommittal about a trade union action, he indicated that they are prepared to exhaust all their resources to amend the current tax proposals.

On a separate note, the GMOA claimed that there is a short supply of more than 90 essential medicines in majority of government hospitals in the country.

The GMOA has highlighted the acute shortage of essential medicines, including paracetamol, aspirin, piriton and saline in government hospitals, at present.

Secretary of the GMOA Dr. Haritha Aluthge said the shortage is prevalent even at major hospitals such as the Colombo National Hospital.

He said the GMOA is receiving concerning data from its branch members.

Dr. Aluthge noted that the Colombo National Hospital, the Eye hospital and several District and rural hospitals are affected by the shortage and said patients are suffering severely due to the mismanagement of authorities.

He said some medicines are in short supply even at the central storage.

Dr. Haritha Aluthge said doctors are compelled to direct patients to private pharmacies due to the shortage.

He said however some medicines are not available in private pharmacies as well.

Dr. Aluthge added some patients are not able to afford certain medicine due to the economic crisis.

He said the government should turn its attention towards reducing the prices of at least some essential medicines.

The GMOA Secretary said the government should at least bear part of the cost of medicines, since prices of some drugs required by persons suffering from non-communicable diseases have skyrocketed.

He also requested the Minister of Health and authorities to look into the shortages at laboratories and other areas such as requirements to obtain scans and x-rays.

Dr. Haritha Aluthge said the GMOA presented a 10-point proposal to address the current issues in the health sector.

He said the government must direct its attention to the matter promptly.

Secretary of the GMOA Dr. Haritha Aluthge warned that the country’s hospital system will collapse if the shortage continues.

Rains to reduce from today