Parliamentarian Wimal Weerawansa says they will contest all upcoming elections under the Supreme Lanka Coalition.

12
SHARES
1.3k
VIEWS
Share on FacebookShare on TwitterShare on Whatsapp

Speaking to media after the inaugural meeting of the Supreme Lanka Coalition, Chairman Weerawansa said they are prepared to contest all future elections.

The meeting was held at the Communist Party headquarters yesterday.

The Supreme Lanka Coalition, a collective of independent political parties was formally established on the 4th of September at the Maharagama National Youth Centre.

Leader of the National Freedom Front Parliamentarian Wimal Weerawansa is the Chairman of the Supreme Lanka Coalition while Chief Secretary of the Sri Lanka Communist Party Dr. G Weerasinghe has been appointed the Secretary of the Coalition. 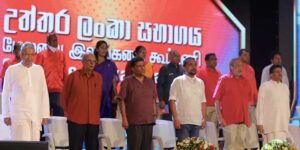 Meanwhile, the National Election Commission is now empowered to announce the conduct of the local authorities elections.

All schools closed today in view of Queen’s funeral

South Korea and the US military have fired a volley of missiles into the sea, Seoul says, in response to...

Asian Winter Games to be held in Saudi Arabia in 2029