27-year-old from Kandy among dead in Seoul stampede

A 27-year-old Sri Lankan has died in a stampede reported in South Korea's capital, Seoul last night when huge Halloween crowds surged into a narrow street.

31
SHARES
3.6k
VIEWS
Share on FacebookShare on TwitterShare on Whatsapp

The Ministry of Foreign Affairs confirmed that a male from Kandy died in last night’s incident in South Korea.

The Ministry said it is working with the Sri Lankan mission in South Korea pertaining to the matter.

Details on whether any other Sri Lankan was either injured or died cannot be verified at the moment.

NewsRadio has requested for a comment on the matter from the Foreign Ministry.

Officials are in touch with the Sri Lankan mission in Seoul to obtain further details as the incident is still developing.

Official said at least 151 people died in the stampede as huge Halloween crowds surged into a narrow street in South Korea’s capital, Seoul.

At least 82 were injured in the incident in the Itaewon nightlife area which was holding its first unmasked Halloween celebrations since Covid.

19 foreign nationals have been confirmed to have died in the incident thus far. 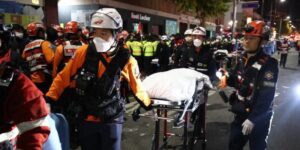 In addition to the Sri Lankan, citizens of China, Iran, Norway and Uzbekistan are among the dead.

Reports describe a desperate scene of people caught up in the crush piling on top of each other.

Most of the dead were teenagers or in their 20s.

The cause of the disaster is still being established.

After holding an emergency meeting, South Korea’s President, Yoon Suk-yeol, ordered a task force to be set up to help treat the injured.

He has launched an investigation into the cause of the crush.

With the death toll as it stands, this is the deadliest disaster in South Korea since 2014, when the Sewol ferry sank killing more than 300 people. 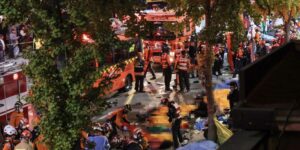 Itaewon is one of the most popular neighbourhoods in Seoul for a night out.

Locals and foreigners flock there every weekend, but Halloween is one of the busiest nights of the year.

An estimated 100,000 people came to celebrate there yesterday to mark the first Halloween since the start of the pandemic where gathering sizes were not limited and people did not need to wear masks outside.

The crush appears to have started in a narrow, sloped alleyway that was overcrowded with people.

Pictures and videos on social media show the alley was so densely packed, people were unable to move.

One video shows people struggling to breathe. In another, emergency responders try to pull out people from what appears to be a pile of bodies.

Cries of distress can be heard. Bodies were lined up along the street covered in blue blankets.

Others were carried, lifeless, into ambulances.

Members of the public desperately administered CPR to those who were lying unconscious, along with hundreds of emergency workers who were sent in from around the country to help. 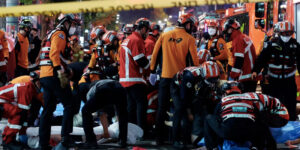 Relatives and friends of missing people have been turning up at the scene this morning looking for clues to reveal whether their loved ones were there.

But the bodies have been moved from the street into a gymnasium, for family members to come and identify them.

With so many victims, this is expected to take time and is the authorities’ immediate priority.

Sri Lankans to miss out on millions of Pfizer vaccine doses

LRT project back on track?